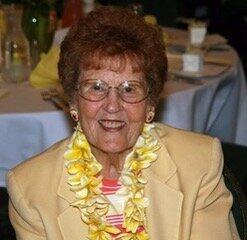 Frances was born September 4, 1919, in Albion, Idaho to John Benjamin Chatburn and Zella Ada Handy Chatburn. She was the fifth child and only daughter in a family of seven children. Her father, John B. Chatburn was born in 1880 in Harlem, Iowa and came with his family to Albion in 1884. Her mother was born in Rathdrum, Idaho in 1890. The Handy family came from northwestern Missouri to northern Idaho in the 1880’s. Both families arrived in Idaho before Statehood in 1890.

Frances was born before few cars had driven on the dirt roads of the Marsh Creek Valley. Her parents wouldn’t own a car for several years after her birth. Albion at the time she was born was still a thriving pioneer town, it had lost the title of County Seat of Cassia County the year prior to her birth, but at one time it was the biggest town on the road between Salt Lake City, Utah and Boise, Idaho. Frances was born on the Chatburn Ranch east of town. She was in the third generation of Chatburn family members to live in Albion.

Albion was a college town, Albion State Normal School, a teacher’s college was located in the town. Her grandfather, John Chatburn, was one of the community leaders instrumental in helping to bring the Teachers College to Albion. Frances and her brothers all benefited from going to public school in Albion. Their grade school and high school served as the training schools for the young student teachers learning their trade. Frances as well as all her older brothers graduated from ASNS, and all her brothers were teachers sometime during their lives.

Frances met Oscar Field while attending Albion and through his perseverance won her heart and they were married on June 30, 1941, in Albion.

From Garfield, Idaho to Eagle, Idaho to Grand View, Idaho they farmed and raised eight children, and had a wonderful life together. They had their fair share of challenges over the years, but they always were able to work together to get through it. Frances was a very driven, energetic women. She taught school for two years before she was married. When they moved to Grand View the Superintendent of the Schools asked her to keep the books for the School District. With the family finances being a bit tough those first years in Grand View she accepted his offer and worked part-time from home keeping the district’s books. Both Frances and Oscar had off the farm jobs in those early years in Grand View to keep body and soul together. Eventually Mom worked full time, once all her children were in school. She supported her husband’s love of farming as well as the time he spent as a County Commissioner and as the President of the Idaho Farm Bureau for ten years.

When Frances retired from the School District at the age of 65, she ran for the State Legislature and served in the House of Representatives for 22 years, retiring at the age of 87. Frances was a member of the Church of Jesus Christ of Latter-day Saints. She served as Young Women’s President, Relief Society President, Teacher and as a Chorister in both the Grand View Ward and the Mountain Home Stake. She loved what the Church did for her family and she and Oscar were sealed in the Idaho Falls Temple in 1957.

Frances’s life always included working side by side with her husband in raising their family, working in the church, and in their community. Frances is preceded in death by her parent’s John B. and Zella Handy Chatburn; her husband, Oscar Bradshaw Field; her six brothers, Vard, Arthur, Acel, Joseph, Dean and Bennie Chatburn; great-granddaughter Katherine Field and son-in-law Phil Vance. She is survived by her eight children, Bill (Susan) Field of Grand View; Jean Vance (Lloyd) Bigelow of McCall; Terry (Leslie) Field and Howard Field of Grand View; Mike (Debbie) Field of Meridian; Janet (Paris) Penfold of Driggs; Julie Field of Boise; Pat (Lisa) Field of Albion; and 31 Grandchildren and 113 Great Grandchildren. We love you, Mom. Get everything in order for us when we come!!!

Frances passed from this life on November 11, 2022, in Meridian, Idaho at the tender age of 103. She was being cared for by The Pointe at Meridian and by St Luke’s Hospice at the time of her passing. As a family we would like to thank these good folks for their love and care for Mom in the last days of her mortal life. As a family we want to thank all the family and friends who have reached out to Mom these past few years. Getting old was never on her agenda but she has so appreciated her association with all of you.

Funeral services will be held Saturday, November 19, 2022, at 12:00 noon, in the Grand View Church of Jesus Christ of Latter-Day Saints Chapel. Arrangements are under the care of Rost Funeral Home, McMurtrey Chapel. Memorials can be made in Frances’s name to the Eastern Owyhee County Library, PO Box 100, Grand View, ID 83624 or Grand View Ambulance, PO Box 191, Grand View, ID 83624.

To send flowers to the family or plant a tree in memory of Frances Field, please visit Tribute Store
Saturday
19
November

Share Your Memory of
Frances
Upload Your Memory View All Memories
Be the first to upload a memory!
Share A Memory
Send Flowers