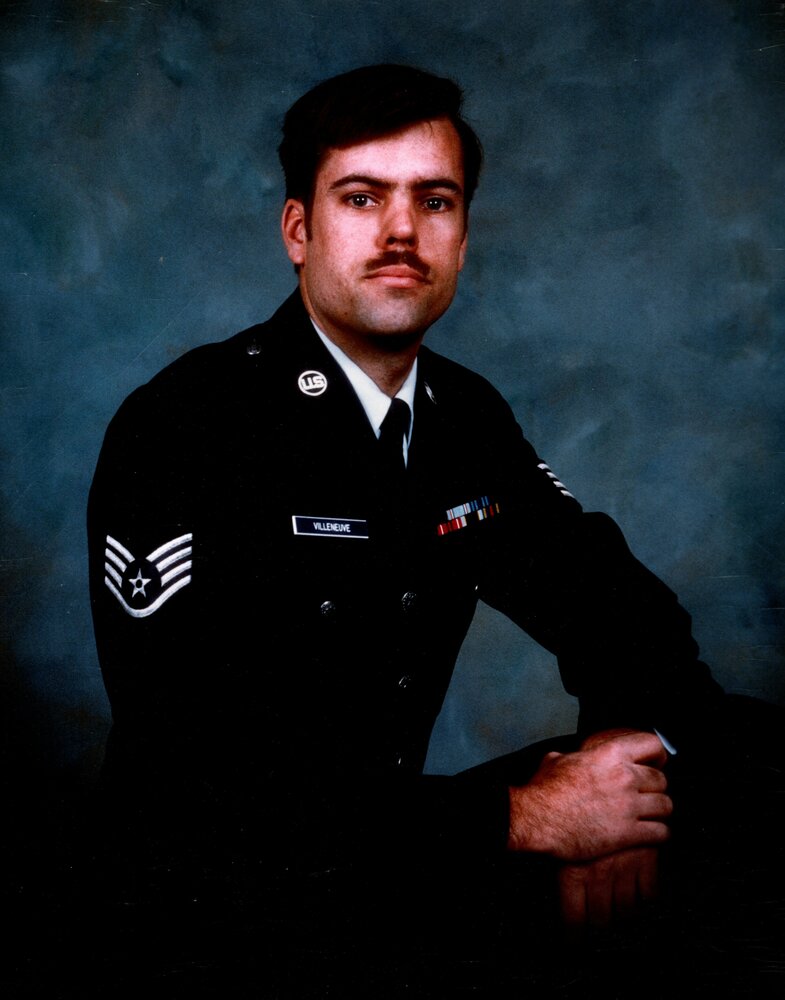 Douglas “Doug” Howard Villeneuve “The Gadget Man”, passed away peacefully on October 7, 2022, surrounded by loved ones at the Boise VA Hospital.  A graveside service with full military honors will be held at 10 A.M. on Tuesday, October 18, 2022 at Mountain View Cemetery in Mountain Home.  Arrangements under the care of Rost Funeral Home, McMurtrey Chapel.

He graduated from Chaffey HS in Ontario, California in 1977. Shortly after graduation he enlisted into the USAF in 1978. During his 13 years, he served as aerospace ground equipment repair mechanic, CES, and 487th TMMS. He was known as SSgt “V” to those he served with. His final station was Mountain Home AFB. After his honorable discharge in 1991, he spent time with family and began a new career.

He became a truck driver and spent another 10 years traveling the country. Big or small, if it had wheels, Doug could drive it. He always fondly talked about driving a GLCM truck while stationed in Comiso, Italy in the 1980s. Doug met his third wife, Denise, in the late 90s. Together they had a son, Jake. Although they divorced several years later, they remained good friends. Denise said when she moved into his house, his fridge was stocked with Coca-Cola and Hershey chocolate syrup. Even 22 years later his fridge always had both. In the early 2000s Doug’s Kidney Failure became reality. He started dialysis and would spend the next several years with his parents and his son doing all he could to enjoy life. He found ways to make his dialysis mobile. He took his son camping at Mountain Home Reservoir and C.J. Strike Reservoir where he taught him how to fish.  In 2008 he received a kidney transplant and regained his health and independence from dialysis.

He had a kindness and concern for others, and he was always ready to step up to help in any project. He was known in the family as the guy to call when you wanted a tree trimmed or removed. Once the chainsaw started, the job wasn’t done until the tree was gone; even if you just wanted it trimmed. He worked for First Student and Brown Bus Company as a bus driver (2008-2015); and returned to truck driving for Fouret Bros. Trucking (2015-2017). Doug made a point to take his son with him whenever possible.

Doug attended every high school event his son had until he graduated. In 2019 Doug again faced kidney failure and dialysis. He managed with the help of his family during the next three years. Doug loved his family and his life and never surrendered to a challenge in his life without giving it a fighting chance. His sense of humor and supportive nature will be missed by all who knew and loved him.

He is survived by his only son Jake whom he was immensely proud of and loved deeply; parents Dorothy and Gean, sister Donna Kovaleski (Dayo Ayodele), nephews Garrett and Austin Kovaleski, brother Kenny, and. Doug was preceded in death by grandparents, Archie and Matilda Villeneuve, maternal grandparents, Clara and Walter McCosh, his brothers Walter “Walt” Villeneuve, Donald Villeneuve and William (Bill) Adams.

To send flowers to the family or plant a tree in memory of Douglas Villeneuve, please visit Tribute Store
Tuesday
18
October

Share Your Memory of
Douglas
Upload Your Memory View All Memories
Be the first to upload a memory!
Share A Memory
Send Flowers