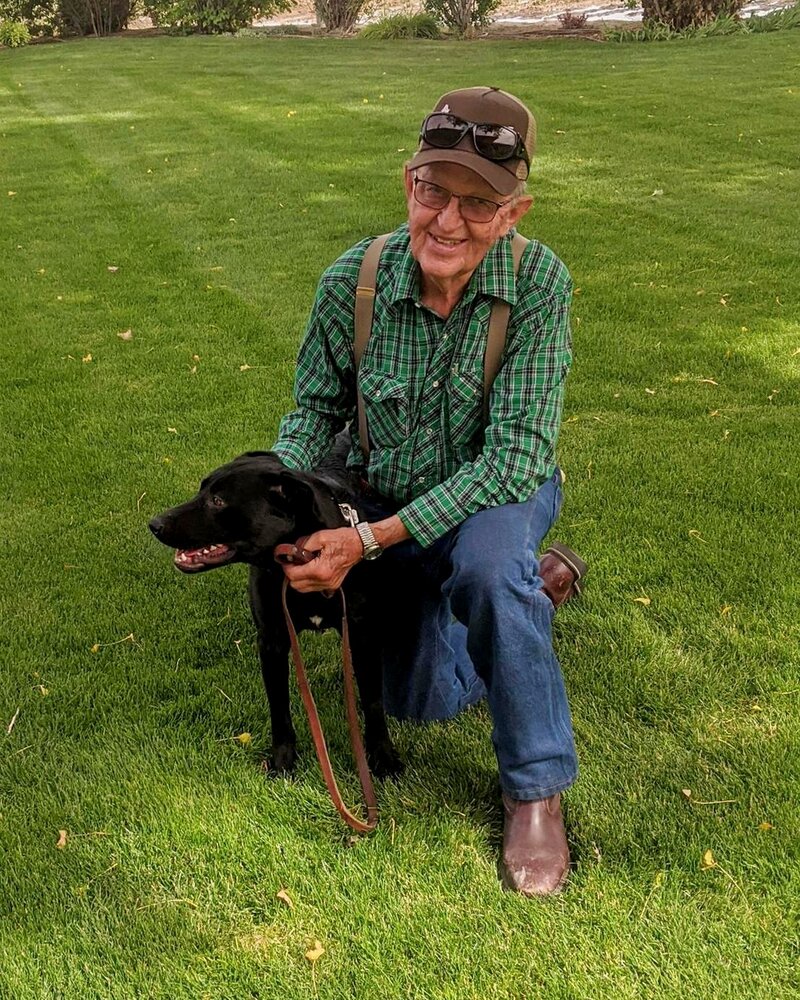 Philip “Gary” Cunningham was born September 9, 1936, to Gerald and Gertrude Cunningham in Norfolk, Nebraska. Because of the drought and depression in Nebraska, the family moved to Grants Pass, Oregon, to farm and milk cows.

Gary began his formal education in a 4-room school in Grants Pass, Oregon. His teacher stated Gary spent most of his first year looking out the window daydreaming about buying cattle and farming with Gerald. Subsequently, he had to repeat the first grade in 1944.

By age six, Gary was certain he wanted to follow in his dad’s footsteps and be a farmer. When the family moved to Grand View, Gary was a freshman in high school. His priority was farming not finding a girlfriend. His favorite tasks were combining grain and plowing.

In 1944, Sharon was born and the family moved to the Lake Hazel Community near Meridian, Idaho. Gerald farmed forty acres and did custom work to support his family. He desired to enlarge the family operation so in 1952, he purchased 309 acres near Grand View, Idaho.

April joined the family in 1955. This was the Spring Gary graduated from high school. Now he could farm full-time.

Gary met Jerry at an Oreana dance in the winter of 1959. He was encouraged to start socializing more by his grandmother, Hannah Cunningham and his parents. At the 1960 Cattleman Dance at Silver City, Gary asked Jerry if he could drive her home. Gary’s friend, Lynn Messenger, followed suit and asked Jerry’s friend, Janet Schroll, if he could drive Janet home as well. This set-in motion, Gary and Jerry’s dating relationship. They enjoyed going to the movies, bowling, and frequently attended dances around the valley.

In 1961, Jerry was about to graduate from high school and attend the University of Idaho. Gary was not in favor of her plan because he had grown very fond of her by this time and Jerry felt the same about Gary. In light of these feelings, Jerry changed her plans and went off to Boise Junior College.

By the winter of 1962, the deal was sealed and a wedding date was set. After the wedding, the couple honeymooned in San Francisco.

Gary and Jerry began their married life in Grand View in a beautiful, remodeled home. Gary continued to farm with his dad and Jerry became a homemaker.

In 1967, Gerald, Gertrude, Gary, and Jerry decided to develop 1,280 acres of desert entry above Grand View. Each person could file on 320 acres. Gary, while farming 489 acres in Grand View, developed the water system out of the Snake River for the project. During this time, Gerald and Gertrude were running Cunningham Equipment, a Case Dealership in Boise. The project was sold in 1970.

In 1972, Gary and Jerry purchased 120 acres from Gerald to have a farm of their own. In 1980, they added another eighty acres to their operation. Not long after this purchase, another ninety-one acres was rented near Grand View from Jerry’s parents, David, and Helen Trauernicht and sixty acres from Gerald and Gertrude Cunningham

Even though farming was Gary’s passion, he enjoyed taking trips in the fall with the family to Yellowstone, Grand Canyon, Zion Park, and Disneyland.

In 2008, Gary and Jerry decided it was time to rent the farm to Scott Bennett, so they could travel and spend more time camping with family. Gary was in a quandary because he missed farming so he did custom work for Scott and other farmers, spring plowing, ground working, combining wheat, hauling sugar beets, and combining corn.

In 2021 and 2022, nine pivots were installed on 360 acres taking advantage of incentive programs offered by Idaho Power. This change was a little bumpy at first, but eventually brought about a more streamlined irrigation process.

In 2022, Gary and Jerry celebrated sixty wonderful years of marriage with a party at the Rimrock Senior Center. A wonderful time was shared by all who attended.

Gary accepted the Lord as his Savior prior to his death and prayed for his family daily. He set a good example for his family about helping those in need and giving back to the community whenever you can.

He touched many lives with his selfless regard for those going through rough times, but did it in such a way that they did not feel like he was he giving them a handout.

He loved his family very much and had the opportunity to meet his first great-granddaughter, Lucille, 2 weeks before he passed away.

We are going to miss you, Gary. It has been an honor to know you and call you Dad, Husband, Uncle, and Friend.

A special thanks to Stace Cunningham, Kim Cunningham, Rachel Lloyd, and Kristine Giesbrecht for the fantastic care they provided for Gary. We greatly appreciate the Grand View Community for their assistance and the Horizon Health and Hospice team for their support and encouragement.

The Celebration of Life for Gary will be August 13, 2022 at Valley Christian Fellowship located at 37866 State Highway 78, Grand View, Idaho. The service will start at 10 am followed by a graveside service at Riverside Cemetery in Grand View. Arrangements under the care of Rost Funeral Home, McMurtrey Chapel. A dinner will follow for those attending at Rimrock Senior Center located at 525 Main Street in Grand View.

To send flowers to the family or plant a tree in memory of Gary Cunningham, please visit Tribute Store
Saturday
13
August