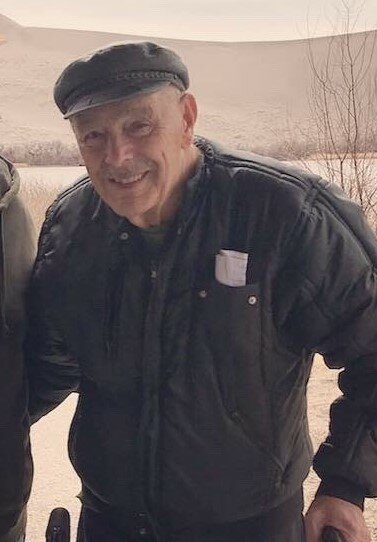 Francis Ernest Lombard, Sr., 96, passed away peacefully on Thursday, June 9, 2022. Ernie was born on April 12, 1926, to Francis Andre and Emma Matilda (Dufresne) Lombard in Pocatello, Idaho. He was the eldest of five siblings, three brothers and one sister, who all preceded him in death.

Ernie was 17 when he joined the Navy in 1943. He served as a medic in the Pacific area on the Patrol Cutter Escort #868 during World War II. He was the only medic aboard the ship. Ernie returned home in 1946 and married Myrtle Anderson. They became the proud father of son Francis Ernest Lombard Jr., in 1947. Ernie and Myrtle were married for 65 years, until Myrtle’s death in 2012.

Ernie attended Idaho State University and graduated in 1950 with a degree in business administration. He went on to work at the Naval Ordnance Plant in Pocatello as an accountant until it closed in 1959. Ernie and his family then moved to Mountain Home, where he worked as a civil servant until he retired in 1985 with the title of “Mr. Accounts Control.”

Ernie was an avid rockhound and a longtime member of the Eureka Rock and Gem club and the Elmore County Historical Society. He served as a Citizen on Patrol for the City of Mountain Home for 18 years and as a volunteer at the Mountain Home VA Clinic for 8 years. Ernie spent his weekends enjoying the outdoors--fishing, hunting, and frequenting yard sales.

Ernie was beloved by all who knew him. His surviving family include his son Ernie Jr.; his grandchildren Alicia (Aaron) Swanson, Suzanne (Mark) Sherman, and Aaron Lombard; his great-grandchildren Will and Lila Sherman; his loving nieces and nephew Kara Edmonson, Priscilla Drammon, Chelsea Jensen, and Stephen Lombard; his cousin Florence Menousek; and dear relatives Larry and Rhonda Hughes.

Ernie left his print on many hearts and did not go anywhere that he did not make a friend. His legacy will live on through his family and friends, contagious smile, love of laughter, and twinkling blue eyes. Ernie was appreciative of his great many friends and caretakers including Randi and Julian Ortega and family, neighbors, housekeeper, landscaper, the Mountain Home and Grandview senior centers, and Horizon Home Health and Hospice.

Ernie will be laid to rest with his beloved wife Myrtle in Pocatello. He did not wish for a memorial service. In lieu of flowers, please make donations to the Mountain Home VA Clinic.

Cremation is under the care of Rost Funeral Home, McMurtrey Chapel.

To send flowers to the family or plant a tree in memory of Francis Lombard, please visit Tribute Store

Share Your Memory of
Francis
Upload Your Memory View All Memories
Be the first to upload a memory!
Share A Memory
Send Flowers