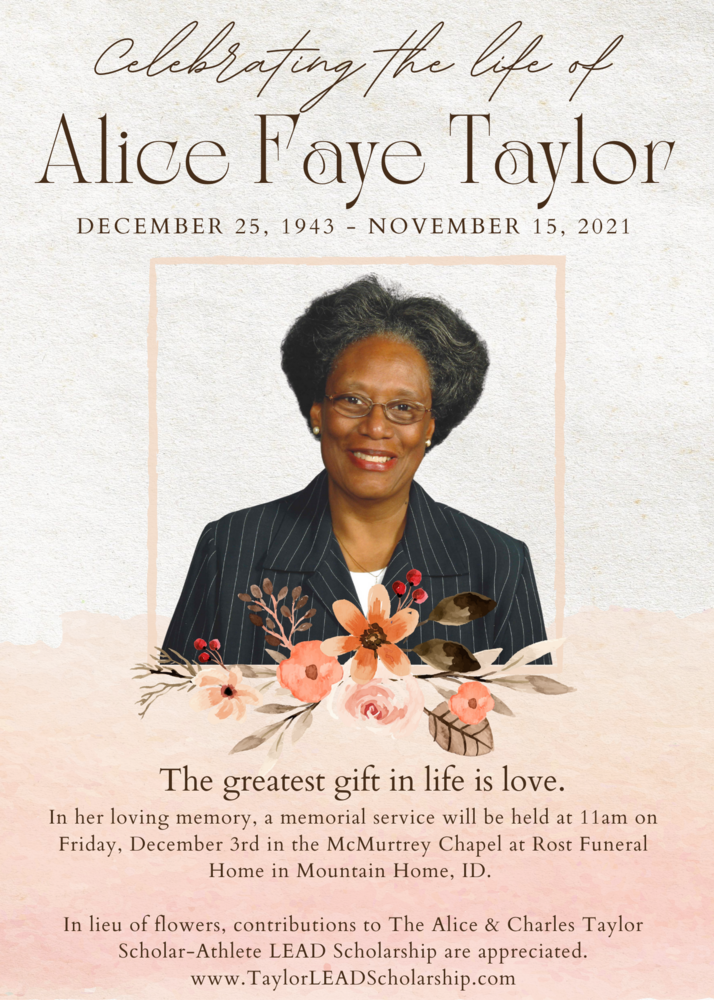 Alice Faye (Booker) Taylor of Mountain Home, Idaho was called home to rest in the everlasting arms of Almighty God on November 15, 2021 at the age of 77. She was called to be in that number of heavenly saints, singing in His glorious choir. Funeral Service will be held at Rost Funeral Home, McMurtrey Chapel on Friday, December 3, 2021 at 11:00 A.M. A viewing will be held before the service from 10:00 A.M. to 10:45 A.M. Burial to follow service at Mountain View Cemetery, in Mountain Home.

Alice Faye was a loving wife, beautiful mother, soul, spirit and advocate to all who knew her.

Alice Faye was born December 25, 1943 in New Boston, Texas to Curtis Booker and Bessie (Campbell) Booker. Yes, she was a Christmas baby and loved every aspect of being a Christmas baby.

She graduated from Galilee High School in Hallsville, Texas in 1963 where she was a gifted dancer who enthusiastically served as the drum majorette in the Galilee HS marching band. Alice Faye then went on to attend Texas Southern University in Houston, TX where she majored in mathematics and continued her education at Boise State University after moving to Idaho.

Alice Faye was united in marriage to Charles C. Taylor, her high school sweetheart, on August 22, 1964. From this union were born two sons (Greg and Gary) and a daughter (Angela).

She was a Paraprofessional in School District #193 at both West Elementary and North Elementary where she proudly taught for over 20 years with the majority of her time spent working in special education before retiring in 2014.

In 1972, Alice Faye became a member of Alfred E. David Chapter #8 of the Order of the Eastern Star Chapter located in Mountain Home, Idaho. She was elected and served as Grand Treasurer of the Prince Hall Grand Chapter for the States of Oregon, Idaho and Montana, Incorporated until her passing.

Alice Faye was an active member of the First Congregational Church in Mountain Home, Idaho.

She was also a member of the National Association for the Advancement of Colored People (NAACP) Treasure Valley Branch.

Alice Faye was a pillar of strength, faith, inspiration and compassion for her family, friends and students. She was a loving, trustworthy, and gentle soul with a quiet power. Most importantly, she was a woman of faith who was grateful for all of the blessings bestowed upon her by her Lord and Savior.

She was a voracious reader who enjoyed sports (especially her beloved Dallas Cowboys, San Antonio Spurs, Boise State Broncos, and Stanford Cardinal). She was a strong advocate for girls & women’s sports and education. In retirement, a great day included laughter with family, phone calls with friends, classic western movies, crossword puzzles and watching her favorite teams while sitting in her favorite chair.

In lieu of flowers, contributions to The Alice & Charles Taylor Scholar-Athlete LEAD Scholarship are appreciated. www.TaylorLEADScholarship.com

To send flowers to the family or plant a tree in memory of Alice Taylor, please visit Tribute Store

Share Your Memory of
Alice
Upload Your Memory View All Memories
Be the first to upload a memory!
Share A Memory
Send Flowers