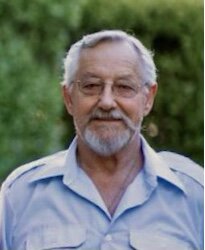 James Edward Charles, 81, died peacefully on October 7, 2021, at home in Mountain Home, Idaho. James, who went by Jim, was born on November 2, 1939, in Dayton, Ohio, the youngest son of the late Dorothy and Robert Charles. He served in the U.S. Air Force for 28 years as a munitions and weapons expert, and as a door gunner on AC-47 and UH-1 gunships during two tours of the Vietnam War. He retired in 1985 as a Senior Master Sergeant. After his military career, Jim worked at Morrison-Knudsen Rail and Micron Technology Inc. in Boise, Idaho.

Jim lived a fulfilling life; after meeting his British wife, Pat, they spent 12 years living overseas in Europe and at various military bases around the U.S.  He loved the great outdoors and was an avid fisherman and hunter. His hobbies included guns and knives, leatherwork, classic cars and trucks, and reading about history.

He is survived by his lovely wife of many years, Pat, whom he met while stationed in England when he was 19 years old. They had three children: Gary, Loraine and Stacy, their youngest son who preceded in death. Jim and Pat have six grandchildren: Chelsea, Tyler, Bryan, Angie, Drew, and Lexus as well as four great-grandchildren: Riley, Trevor, Ireland, and Maverick McKiernan.  He was greatly loved and will forever be in our hearts.

A Memorial Service will be held at a later date. Cremation was under the care of Rost Funeral Home, McMurtrey Chapel.

To send flowers to the family or plant a tree in memory of James Charles, please visit Tribute Store

Share Your Memory of
James
Upload Your Memory View All Memories
Be the first to upload a memory!
Share A Memory
Send Flowers