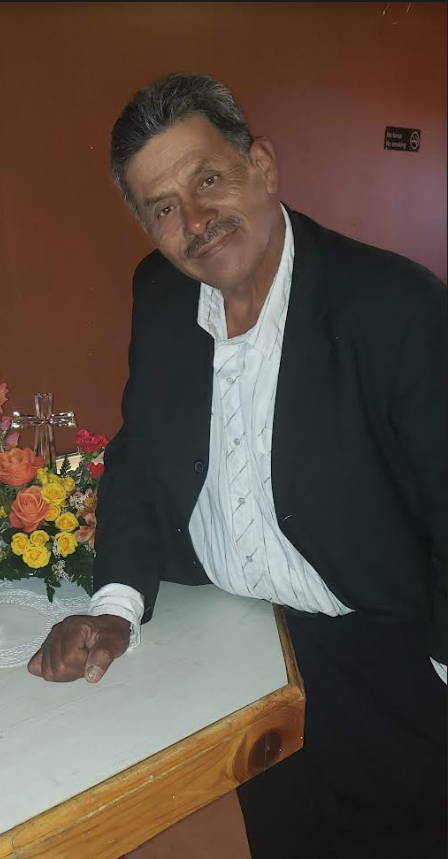 Melesio Brito Flores, age 69, is now resting up in heaven with our Lord and Savior Jesus Christ. On Tuesday, September 28, at Rost Funeral Home, McMurtrey Chapel, a viewing will be held from 4:00 PM until the 6:00 PM Rosary.  Funeral Mass will be held at 10:00 AM, on Wednesday, September 29, 2021, at Our Lady of Good Counsel Catholic Church and burial will follow at Mountain View Cemetery.

Melesio was born on February 12, 1952 to Epifania Lopez Flores and Bulmaro Brito. He was the eldest son of Bulmaro Brito who was married five times and who had 16 children total. Bulmaro Brito after 50 years found Melesio through his grandson Clemente Aguirre Brito in 2019 who felt his grandfather needed to make peace with his eldest son and reunite as father and son. Melesio was raised by his single mother and grandparents. Melesio was working by the age of one year old. He would gather kindling branches so his mom and grandparents had kindling for fire that would run their outdoor food stove. Throughout his younger years Melesio had to feed the family farm animals and home school at night by his grandma who taught him mental math. Melesio had one sister Sarah Miranda Flores, brother, Domingo Miranda Flores, brother Nabor Miranda Flores.

Melesio Brito Flores arrived in Glenns Ferry, Idaho at the age of 24. In Glenns Ferry he worked for multiple farmers and then in the 1982 he started working for Elwood, & Sid Wing, & after 25 years Squaw Creek Farms closed its doors. In 1986 Melesio Brito Flores met his soul mate and married Debra Melissa Guajardo the love of his life on May 6, 1989 and was married for 35 years. From this union Melesio is survived by his wife and his two children Bianca Melissa Garcia, and Melesio Brito, Jr.

Melesio decided he was going to open his own business and name it Triple "B" Lawn Care and Handyman Services because he believed that he and his children needed to work and earn their own money. On May 16, 2004 the business was created and was operated by Melesio Sr., Bianca, and Melesio Jr.

Melesio loved to vacation in his birth town of Acapulco, Guerrero Mexico at his Mayan Palace Timeshare where he would deep sea fish for Marley, Swordfish and Tuna.

The happiest time of his life was when he had to give his daughter away in marriage to his Son-in-Law Emilio L.P Garcia. He danced and celebrated with them until 6:00a.m. at the Elk’s Lodge.  He loved his three grandsons’, Adan Jesus Garcia, Manolo Alejandro Garcia, and Mateo Samuel Garcia dearly and loved to spoil them individually. He was a non-stop hard worker, a fabulous family man, he loved to cook for his family and his favorite food was eggs a La Mexicana with tortillas! He will be missed dearly! Our love for him is never-ending!

To send flowers to the family or plant a tree in memory of Melesio Flores Brito Sr, please visit Tribute Store
Tuesday
28
September

Share Your Memory of
Melesio
Upload Your Memory View All Memories
Be the first to upload a memory!
Share A Memory
Send Flowers