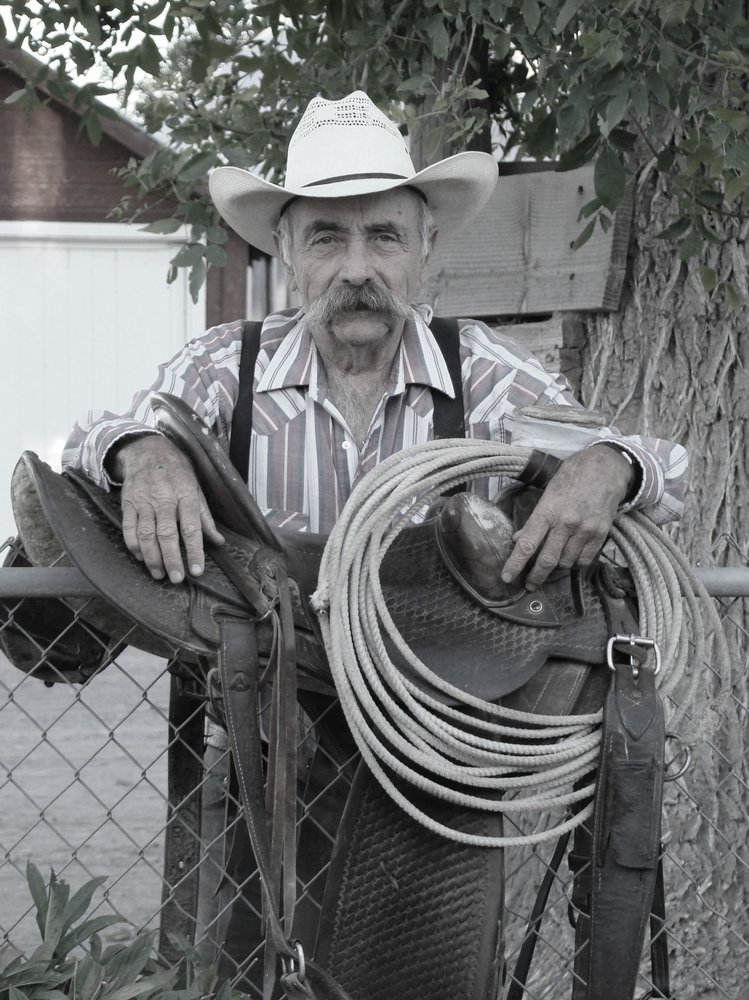 Ron (Ronald) Edward Prow, 79, of Bruneau, passed away peacefully at home Saturday morning on March 27, 2021.  He was a beloved husband, father, grandfather and great-grandfather, friend, and loved ranching and the outdoors.

Ron was born June 22, 1941 in Nampa, Idaho to Claude and Doris Prow.  Ron joined his older brother, Mick and was followed later by a younger brother, David.  He grew up in the Deer Flat/Melba area and learned farming from his parents.  After graduating from the eighth grade at the Schism School, he went on the Nampa to finish out his high school and graduated in 1959.

He married Myrna Goodman in 1960 and they had four children together: Jace, JayDene, Van, and Tramp.  He worked for various outfits in his early years including, Joe Nettleton, Hubert Nettleton and Frank Baltzor where he worked cattle and broke horses.  Here he made many lifelong friends and lots of great memories along the way.  These included from living in Deer Flat, Melba, Jordan Valley, Reynolds Creek and Bruneau areas.

In 1972, he moved to Bruneau and the following year got his beloved ranch.  It would be his life’s work to see it grow.  After his marriage ended, he later met and married Connie Carpenter and got a new stepson, Tanner Carpenter.  Ron and Connie spent just shy of thirty years together working side by side and laughing a lot along the way.  They were a great match.

Ron was also involved with the Bruneau Rodeo for 25 years and helped work hard to set up the new arena site with his friends.  He was also a Fire Commissioner for 9 years and President of the Hot Springs Ditch Company for 20 years.

Ron loved watching his cattle and they were definitely taken well care of.  He loved his horse, Harry, and his best dog Teddy, which he referred to as his hired hand.  He enjoyed taking his cattle to the Owyhee Mountains in the summer and was just as excited to have them home in the fall.  He also enjoyed hunting elk and deer with his friends and family.  Dale Blanthorn and Ron had many hunting tales to tell but most of all, they tried to make sure everyone had a good time.  Ron enjoyed visiting with people.  He liked to recall the fun times he had running wild horses, working cows, County Fair memories, and hilarious moments that happened with the people he knew.  He could make us smile and laugh so hard.  Most of all he loved watching his family grow up and have children of their own.

Ron is survived by his wife, Connie and his children: Jace (Stacie) Prow of Mountain Home, JayDene (John) Aquiso of Bruneau, Van (Gayla) of Bruneau, Tramp (Jana) of Hammett, and Tanner (Deidra) Carpenter of Mackay.  He also was a proud grandpa to 17 grandchildren, great-grandpa to 22 and an uncle/great-uncle to many nieces and nephews.

Ron was preceded in death by his parents, Claude and Doris Prow, his brother Mick Prow, and a grandson Tucker Prow, along with some very special lifelong friends.

The family would like to thank Tiffany Mederios from First Choice Hospice for all their care and support. She was our angel who showed us so much compassion and professional support when we needed it most.

Graveside services will be held on Friday, April 2, 2021 at the Bruneau Cemetery and arrangements are being handled by Rost Funeral Home, McMurtrey Chapel of Mountain Home.  There will be a meal afterwards at the Bruneau Park.

To send flowers to the family or plant a tree in memory of Ronald Prow, please visit Tribute Store
Friday
2
April

Share Your Memory of
Ronald
Upload Your Memory View All Memories
Be the first to upload a memory!
Share A Memory
Send Flowers