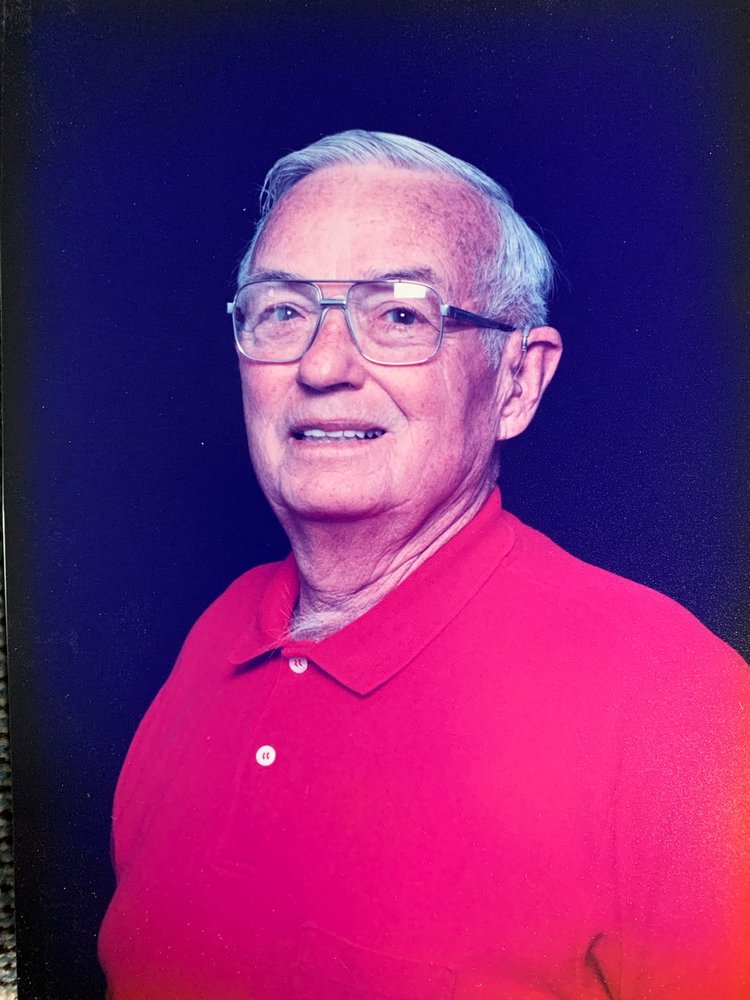 Dick King was born on February 1, 1932 in Pocatello, Idaho to parents Lambert Clarence (Clix) and Helen C. King.  The family lived in Gooding, Idaho and Nampa, Idaho where Dick graduated from Nampa High School in 1950.

During his high school years, Dick lettered in Football, Basketball, Baseball and Track.  He was part of the 1950 NHS Football Championship team which was the first team honored in the Idaho High School “Legends of the Game” at a BSU football game.  He was also the recipient of the NHS Idaho High School Hall of Fame Presidents Award and the 4th District Coaches Presidential Award.

Dick joined the Air National Guard after graduating and was soon called to active duty during the Korean War.

After leaving the service, Dick moved to Glenns Ferry where he eventually purchased the Diamond Laundry from his parents.  He owned and operated the industrial laundry until he sold the business to his children, Doug, Kevin and Pam.

In 1953, Dick married his high school sweetheart, Cindy Martineau, and they lived in Glenns Ferry until the time of his death.

Dick’s lifetime goal was to leave the world a better place.  In support of that goal, Dick was elected to the City Council, serving for 6 years before being appointed as acting mayor for 8 months.

He was a member of the Glenns Ferry School Board for 19 years, serving as Chairman for 16 years.  During that time, a new high school, elementary and gymnasium were built, as well as a 20-year school development plan.  Dick was instrumental in building the GFHS girls softball field where every year he would prepare the field for the season as well as helping coach the girls softball team.  In 2018 he was honored by the field being named after him.

Dick was appointed by then Governor Evans to be the Chairman of the Recreational District.  During his 13 year membership and with his efforts, a new City Swimming Pool was built.

Dick was an active member of the Lions Club, where he chaired many projects including new bleachers for the football field and Outlaw basketball tournaments.  Dick was an avid fisherman, athlete, sportsman, hunter, golfer and in his earlier years, a member of the Idaho Retriever Club.  He spent many hours coaching, watching and cheering for his children, grandchildren and great-grandchildren in their many sporting events.

Dick as an active member of our Lady of Limerick Catholic Church where over the years he took on many tasks, including occasionally filling in as an altar boy during his 60’s.

Dick was the recipient of The Idaho Statesman “Portrait of a Distinguished Citizen”.  He was also named Citizen of the Year in Glenns Ferry.

Dick and Cindy have 6 children, Deb (Rick) Kunkler, Doug King, Karen (Dan) Hall, Kevin (Natasha) King, Pam (Wade) Darrington and Kelli McHone.  They have 17 grandchildren and 19 great-grandchildren.  He also has 1 living sister Judy (Bob) Walker. Dick was named “Papa” by his grandchildren and is affectionately referred to as Papa by many in the community.

Dick was preceded in death by his parents and sisters, Kay Dunn and Barbara Little, and daughter-in-law, Denise King.

In lieu of flowers, donations may be made to ”Papa Dicks” Girls Softball Scholarships, c/o US Bank, located at 4 E Idaho, Glenns Ferry, Idaho, 83623.

A private family mass will be held and a public Celebration of his life will be held this spring. Arrangements are under the care of Rost Funeral Home, McMurtrey Chapel.

To send flowers to the family or plant a tree in memory of Richard King, please visit Tribute Store