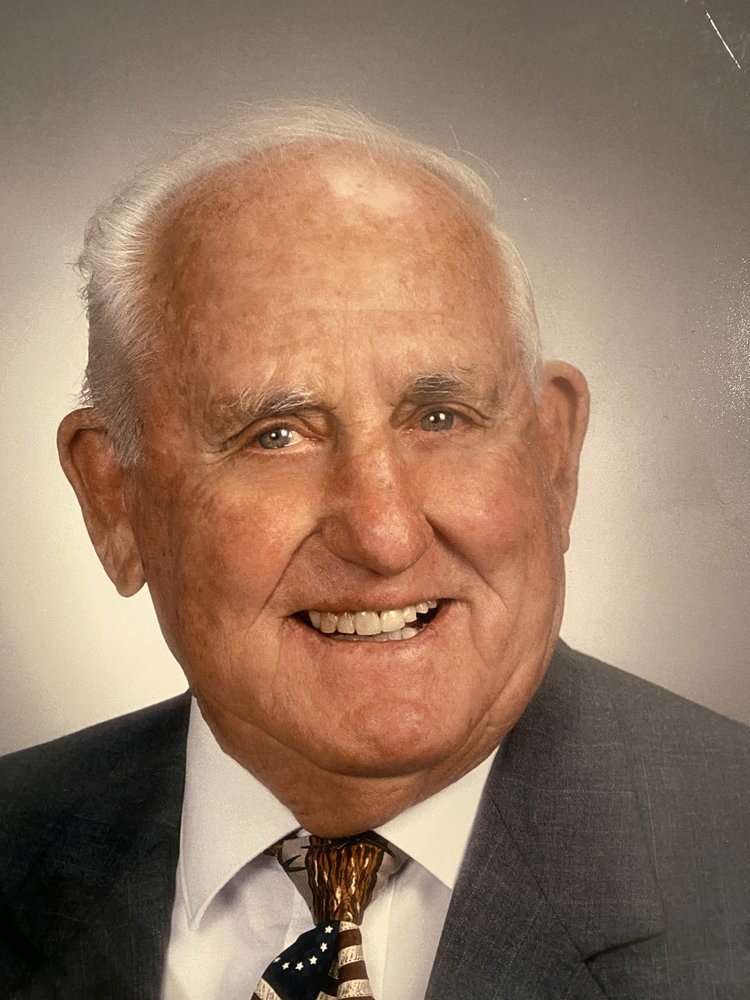 Dr. John F. Bideganeta DDS, 95, of Mountain Home, passed away on October 5, 2020 at home.  A viewing will be held at Rost Funeral Home, McMurtrey Chapel, from 4:00 pm until the Rosary at 6:00 pm on October 13.  Funeral Mass will be held at 10:00 am on Wednesday, October 14 at Our Lady of Good Counsel Catholic church, followed by burial at Mountain View Cemetery.  In order to protect the safety of the attendants, please wear a mask.

John was born January 30, 1925 in Mountain Home to Agapito Bideganeta and Nicanora Monasterio Bideganeta. He was the youngest of the Bideganeta family, following Pauch, Nash, Lou, and Lenore.  Two younger brothers passed away as babies.  John was a very small baby, weighing less than 3 lbs.

They would place him on the open door of the wood cook stove to keep him warm, which was the old Basque “incubator”.

His childhood was spent in Mountain Home and in the Bruneau Sheep summer sheep camps and at Headquarters with his extended Basque family. He met Margaret McNeil on the tennis court in Mountain Home in 1942, and they quickly fell in love. He graduated from Mountain Home High School in 1943, and immediately joined the Navy to help with the war effort.

Despite his best efforts to get to the warfront, he was retained at San Diego as a pharmacist’s mate 1st class by an instructor that took a particular liking to him.  While stationed in San Diego, he married Margaret.  She returned to Mountain Home to live with John’s family.

After the war was over, he returned to Mountain Home for a short time to be with his wife and their new daughter, Diana.  John then enrolled at the University of Idaho and attended for 2 years on the G.I. bill.

Following his 2 years at Idaho, John and his family moved to Chicago so he could attend Northwestern University Dental School.  While in Chicago they had a great many visitors from Idaho, and shared many memorable stories.  He graduated from dental school in 1953, and returned to Mountain Home to start his dental practice at the request of Dr. Malone Koelsch, the local physician.

John and Margaret made their lifelong home in Mountain Home, with three more children, Alisa, Kim, and John being born there.  They enjoyed a wonderful companionship with Malone and Betty Jo Koelsch, Art and Lou Smith, and Claude and Christy Bermensolo, better known as “BBKS”.  The eight of them retained a very close friendship throughout their lives. Margaret lost her battle with Alzheimers in 2013.

After being alone for a couple of years, John became very dear friends with Pam Brophy, and they maintained a close relationship until his death.  John varied somewhere between Pam’s #1 and #25 throughout their time together.

John also maintained very close ties to his extended Basque family throughout southern Idaho and with his brothers and sister and their families.  Although the youngest of the Bideganeta children, he was considered the patriarch of the family.

He practiced dentistry in Mountain Home for over 50 years and at one time was the oldest practicing dentist in Idaho at 80 years old.  He was very supportive of his profession and was past president of the Idaho Dental Association and very active in the American Dental Association.

John was extremely supportive of Elmore Medical Center, having served as Chairman of the hospital board for over 30 years.

John was preceded in death by his parents, 5 brothers, one sister, and one granddaughter, Monique Witherspoon.

Donations may be made to Euskal Lagunak Basque Association for the building fund, or to any other charity of your choice.

The family would like to thank the following for their wonderful care in dad’s last weeks: Patty, Amy, Linette, Amber, Kathy, Kaitlyn, and Elisha. Despite his attitude on some days, he loved you all!

In order to protect the safety of everyone in attendance, masks will be required.

To send flowers to the family or plant a tree in memory of John Bideganeta, please visit Tribute Store